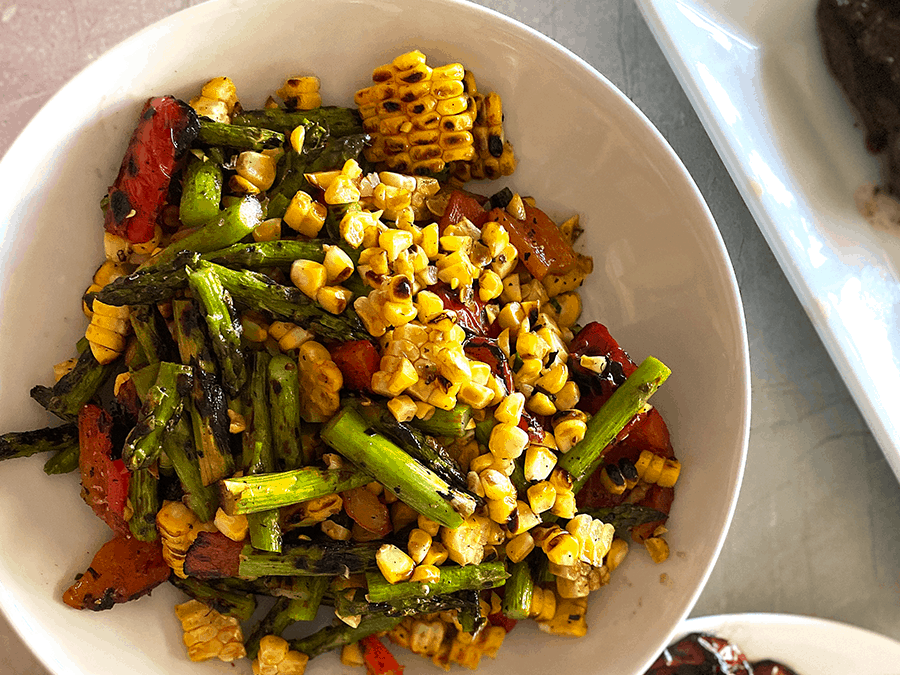 If you love the smokey flavor of char-grilled veggies, you’ll love this grilled vegetable salad. This salad is perfect with grilled meats, so you can grill the veggies along with your meats. Then toss in a little vinaigrette for a quick and tasty BBQ salad.

Summer grilling should be easy and breezy, so you can sit back and relax with a glass of sangria or a margarita as you’re cooking and chatting with your favorite people. Or, in my case, watching your son do the grilling. That’s even better!!

Best Grilled Vegetables For This Salad

We usually eat this salad with grilled meats, so I use veggies that are great with steak, like asparagus, corn, and bell peppers. But you can use your favorite vegetables for this salad and switch them up based on the proteins you’re grilling.

The asparagus, corn, and red bell pepper combo is my husband’s favorite. But other great combos include zucchini, grape tomatoes, and peppers, or eggplant, peppers, red onion, and cherry tomatoes.

Peppers were just made for grilling, so no matter what combo of veggies I use, red peppers are always included. Peppers tend to char quite a bit, so depending on how much you like the charred taste, you may want to remove the skin. In that case, cover the grilled peppers with some foil to let them steam for a bit. This will make it easier to remove the skins.

Prepping Your Veggies For Grilling

Definitely season your veggies before grilling. I usually brush the veggies with a bit of olive oil and sprinkle them generously with salt and pepper. Then let it sit for a few minutes so the salt can stick to the veggies. If you salt and then grill right away, the salt doesn’t have a chance to permeate the veggies to season them properly. Give salt a chance!

Whichever combo of veggies you use for your grilled veggie salad, cut them into big chunks to make it easy to grill. Larger pieces are less likely to fall through the grates and get overcooked.

You can cook corn with or without the husk, but keep in mind it will take twice as long to cook the corn that way. I usually remove the husk, so everything cooks at roughly the same time.

Veggies take a little longer to cook than meats. Make sure to time your cooking, so veggies are done when the meat is ready. Heat up the grill to the highest setting, place the meat in the hottest section for searing, and add the veggies around the meat, away from the hottest parts of the grill. Veggies need a slightly lower temperature, so they don’t burn.

Once the meat is done, let it rest while the veggies finish cooking.

Once the veggies are done,  you can chop them a bit if necessary and then toss in a dressing. Or you can plate the grilled vegetables and then drizzle the vinaigrette on top. Finally, if you’re in the mood and feeling festive, crumble a little feta or queso fresco on top. Oh my goodness, my mouth is watering now!

I used a simple balsamic vinaigrette for this salad, but I also love to drizzle my Cilantro Chimichurri Sauce on the veggies. This go-to Argentine table sauce is also great with meats or as a dip with plantains. So, so good!

When people think of grilling, the season that most often comes to mind is summer. But, for me, the season I think of is the winter, when the weather is the nicest in Miami. By the time summer rolls around, we’re rolling our activities indoors to stay away from the Miami summer heat and humidity.

This makes me think of the importance of perspective. We make assumptions based on our own lived experiences. This is, of course, natural. But we need to leave some room to allow for the perspective of others. Of course, I’m assuming your summer is different from mine… maybe it isn’t 😉

If you love the smokey flavor of char-grilled veggies, you’ll love this grilled vegetable salad that’s a perfect complement for steaks on the grill.

3 ears of corn on the cob

1 bunch asparagus (about 1 pound) – try to get thick stalks

1 teaspoon basil (if you have fresh basil, use a tablespoon of basil ribbons)

Or use ¼ cup Cilantro Chimichurri Sauce.

Preheat: Heat a grill to medium to high heat, depending on what else you’re grilling. For example, steaks need a higher heat than veggies.

Cook: Grill the veggies until they have some char and color but aren’t burned. You don’t want to dry out the veggies, so they should still have some bite. Grill times will vary based on your grill and the thickness of the veggies. But following are my grill times: