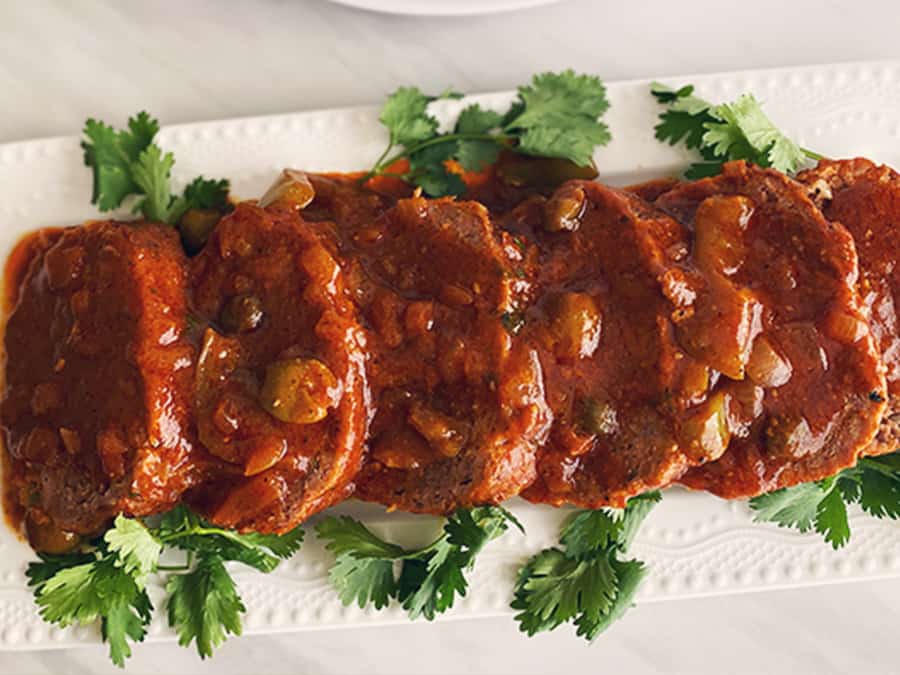 My brother loves Mami’s Pulpeta and asked me to post the recipe ASAP so he can make it. So even though it’s the middle of summer right now, I’m posting this ultimate comfort food recipe. Pulpeta is the Cuban version of meatloaf made with lots of love and Cuban sazón.

I love both the American-style meatloaf and pulpeta because this dish is comfort food in any language! Even as I’m writing this, I want to head to the fridge and heat up a slice (or eat it cold). I’d share it with you, little brother, but I just can’t FedEx it to ya!😉

What Makes Pulpeta Different From Meatloaf

While both pulpeta and meatloaf are made with ground beef shaped into a loaf, there are a few differences that make this my favorite version. So let’s break them down.

Pulpeta is made with a mixture of ground beef, pork, and ham. You can mix with equal parts of each or add a little more beef than ham and pork. Either way, it will be tasty. The meat is seasoned with onions, peppers, garlic, Cuban spices, and little cooking wine.

Then you add about a half cup of cracker meal and an egg to bind. Shape into a loaf and let it rest in the fridge for a few hours.

Pulpeta is saucy, just like most Cubans! This Cuban Meatloaf cooks in a tomato-based sauce with Spanish olives, capers, Cuban spices (oregano, paprika, cumin, bay leaves), cooking wine, and aromatics (onions, garlic, and peppers). You slow cook the meat in the sauce for about 45 minutes, so every bite is bathed in this savory sauce. So, so good! (I know you’re drooling, Henry.)

Pulpeta is dusted with a bit of cracker meal and then browned in the pot, so the outside gets a slightly crunchy coat that seals in the juices. I’ll admit that the American-style version is a little easier because you just press the ground meat mixture into a loaf pan and bake in the oven. But browning the meatloaf and cooking it on the stovetop makes the meatloaf super tasty and saucy.

What Do You Serve With Pulpeta

Pulpeta is the ultimate comfort food! This delicious Cuban meatloaf is made with three kinds of ground meat and a savory tomato sauce. Yummy!

8 ounces tomato sauce (one can)

Mix the ground beef, pork, and ham together. You can grind a six-ounce portion of ham steak in the food processor to make the ground ham. Add the spices, onions, peppers, and garlic and mix well. Next, add the beaten egg and bind together. Finally, add a ½ cup of cracker meal and mix well to bind. If the meat is not binding enough, add 2 more tablespoons and mix well. Shape into a log and let it rest in the fridge for two to four hours.

After two to four hours, coat the meatloaf in cracker meal. Heat ¼ cup of olive oil in a large saucepan over medium heat and brown the meatloaf on all sides for about eight minutes. Turn the meatloaf very gently using two spatulas, so the meatloaf does not break apart. I like using a fish spatula or a wide spatula for this.

Once the meat is browned on all sides, remove it from the pan and set it aside.

While the meat is resting, chop the onions and peppers and crush the garlic.

In the same heated saucepan where you just browned the meat, add the onions, peppers, garlic, and brown for 3-5 minutes. Add the spices and cook for 30 seconds. Next, add the tomato sauce, cooking wine, bay leaf, olives, and capers. Add half a cup of water and bring to simmer. Add the meatloaf and lower the heat to low, and cook for 45 minutes. Gingerly turn the meatloaf in the sauce a few times.Once the sauce has thickened, and the meatloaf is cooked through, turn of the heat. Transfer the meat to plate, let it rest 5-10 minutes, slice the meat, add the sauce, and serve.

Serve with white rice and maduros, or mashed potatoes and veggies.

The meat mixture doesn’t have to be precise, you can adjust the ratios to suit your taste buds or what you have on hand.

This recipe makes 4-6 servings, depending on your portion sizes.